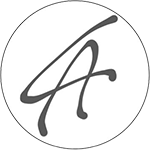 ‘The Night the Lights Remembered’ No.1

LIMITED EDITION PRINTS (of 10) are available. These are signed and dated with certificate of authenticity

I started this painting after a visit to NYC (pre 9/11) and I wanted to express the atmosphere I felt while exploring areas like Greenwich Village, mooching having coffee, people watching and such. The relaxed, trendy flux of people coming and going, meeting and chatting, lunching and leaving tempted me to make a few sketches and cartoons of this ‘jet set’ oblivious to my doodling.

Back in the UK I started on canvas with oils and almost completed it. However, something was ‘missing’ it just didn’t sit right with me so I shelved it.

A while later the devastating events of 9/11 took place. Then after things settled down I decided to travel back to NYC and was overwhelmed with emotion to witness the two tribute beams of light* shooting up into the sky above Manhattan. It was then that I knew what I had to add to the painting I had started. As soon as I returned I eagerly started on this painting again and added the lights and called it ‘The Night the Light Remembered’

*The Tribute in Light initially ran as a temporary installation from March 11 to April 14, 2002, and was launched again in 2003 to mark the second anniversary of the attack. As of 2016, it has been repeated every year on September 11. It had been announced that 2008 would be its final year,[ but the tribute was continued in 2009. 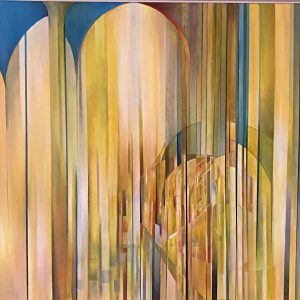 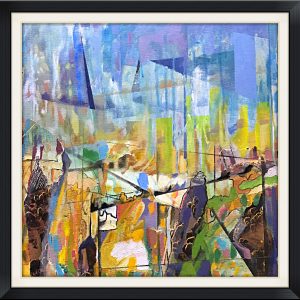 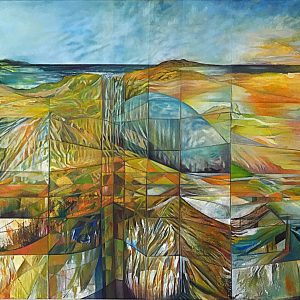 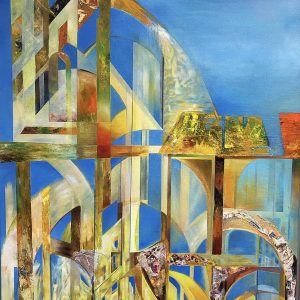 Visitors are welcome to view original works at the studio. Contact me via website, email or call 07902511399